The building was constructed completely of brick. It is classified among the category of kiosk plan mosques. Some additions were made in front of and around the building during the Safavid Period. There are inscriptions on both the minaret and the mosque. The date provided on the minaret is 109 7, while the date on the mosque is 1134. The minaret was built during the reign of Malik Shah. The mosque, on the other hand, was built in time of Muhammad Tapar, the son of Malik Shah. The building was extended in the Safavid Period with the addition of naves; however, these naves have not survived. The section which is thought to have been built in the Seljuk Period is the one with a single dome. This section has thick walls. 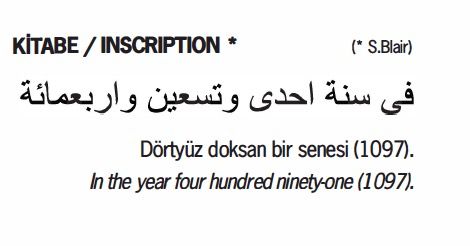 The minaret behind the mihrab has a cylindrical body which tapers towards the top. The minaret also has thick walls. There is an inscription band under the balcony. There are scaffold holes on

the body, placed at intervals. The comers on the surfaces of the bricks of the minaret curve in accordance with the shape of the building.

The dome covering the central section rests on an octagonal drum. There are squinches in the comers of the drum. There are also connections between the squinches and the arches. The comer sections of the squinches are shaped with three rows of stalactites. All interior surfaces of the mosque are covered with succo and terracotta. The decorations consist mostly of engraved vegetal motifs.